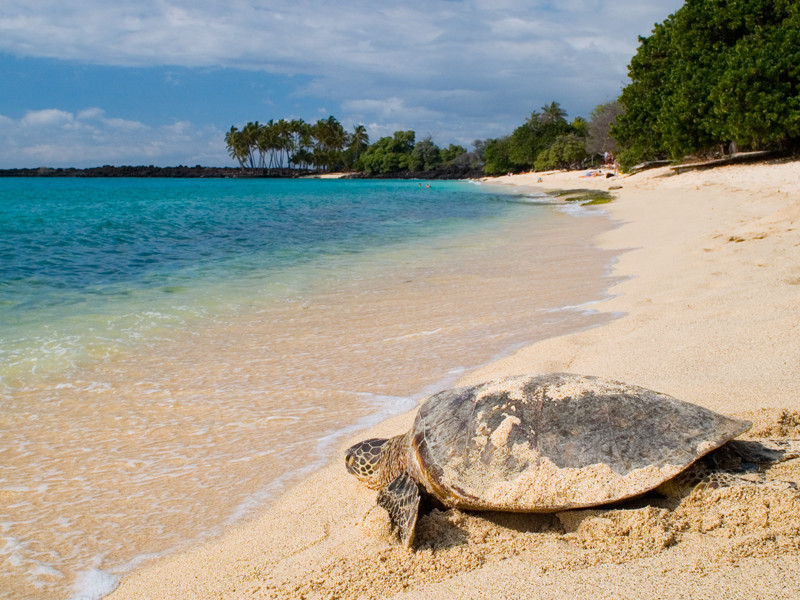 A quick global warming can surpass sea turtles capacity to adapt to new conditions and ocean temperatures that in consequence will increase the heat in the nests, which will severely affect the breeding process. It is not known with any certainty what sea turtles’ response to warmer temperatures will be, but scientists point out that they are completely vulnerable and are unlikely to survive.

Several greenhouse gasses cause global warming, and most of them are the result of several human activities, mainly burning fossil fuels. One of the main ones is the combustion of gasoline for cars, factories, and electricity. Carbon dioxide, methane, nitrous oxide and other gasses used for cooling are also highly harmful to the environment.

> Several greenhouse gasses cause global warming, and most are the result of human activities.

As we mentioned in other articles on this site, the temperature of the nest defines the sex of the offspring. If the sand is warm, more females will be born than males, which will alter the genetic diversity. But, if the temperature is too hot, the eggs may not hatch at all. A global increase in the temperature of only 3 degrees could lead to extreme levels of mortality of offspring and a very alarming decline of nesting, further putting them on the way to extinction after all these millions of years of inhabiting the planet.

The increase in water temperature also leads to a decline in the population of some species that may be part of the regular food of sea turtles. Similarly, the acidification of the ocean caused by the absorption of carbon dioxide from the atmosphere also has consequences in its reproduction and food availability. Coral reefs are highly affected by this condition, which causes a discoloration that shows that they are “sick” and this also alters the natural cycle of sea turtles, since the young ones stay inside reefs while they grow, especially the hawksbill turtles.

These marine reptiles use the sea currents to orient themselves in the ocean and find their prey. Changing ocean temperatures also affect these currents and the availability of food that is common in sea turtles’ diet.

Extreme and constant weather phenomena related to the climate change contribute to increasing beach erosion, the frequency of storms and periodic flooding, which is catastrophic for the nest and the development of the eggs.

In one scenario, If there are nested eggs on the beach and the flooding water covers them, they are unlikely to survive. On the opposite, if the ocean waters recede and the eggs are too far from the sea, if the offsprings manage to hatch, the distance that the hatchlings have to travel will be larger, and the possibility to reach the ocean to get away from predators will be almost impossible.

In other articles, we discussed how sea turtles return to the same beaches where they were born to lay their eggs. But what will happen if these places do not exist anymore? Will they be able to adapt to new places?

Another problem related to global warming and sea acidification is that the production of algae could increase, and new diseases would appear, contributing to the development of epizootics. An epizootic is a contagious disease that attacks a particular animal population during a given period. It can start in a particular region of the world and spread on a global level. This condition is equivalent to an epidemic or pandemic in humans.

Approximately 33 percent of greenhouse gasses produced by human activities is absorbed by the ocean.

Global warming is a problem that affects every corner of the planet, striking every biome and every living being. It is like a chronic disease that is getting worse over the years, and while we cannot eliminate it entirely, we can take action to improve the conditions of the environment and reduce its impact. Sea turtles are one more of the thousands of species threatened by the climate change, and the other problems they face do not help to increase their population.

Thinking in reversing the few steps taken to reduce the emissions to get a few jobs now is a myopic vision that will collect a high toll in the future. Politicians that just want their name cheered now by getting solutions for some people but do not think in the future of the human race and their offspring.

Other insist that global warming is a conspiration, but regardless its cause, as we will not get involved in political views, thermometers do not lie nor have a political perspective and the last years have been without a doubt the ones with the hottest temperatures since we have registered them.