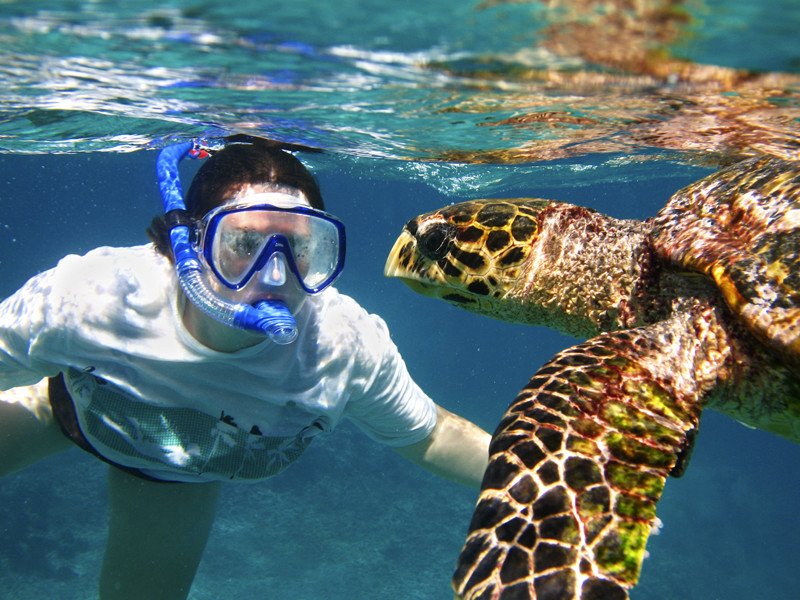 Undoubtedly men have been present in the life of sea turtles, either positively or negatively. Many people fight every day and even donate their money to preserve them, while others kill them ruthlessly to obtain a profit.

If you have had the opportunity to spend a few nights at a hotel located on a beautiful beach, surely you have thought “how wonderful is our planet,” but are you sure that such place did not destroy the natural habitats of several species?

The lack of information makes us sometimes take actions that indirectly cause the deterioration of the natural habitats of thousands of species. The construction of such hotels, houses, and roads where we can transit and have fun with family and friends, for sea turtle breeding mothers represent fewer areas where they can lay their eggs, forcing them to look for other places.

In several hotel beaches in the Caribbean, turtles arrive to lay their eggs. Although it is a big attraction for tourists, it causes a lot of stress to the turtles, and if there is a lack of care, the eggs could be damaged irreversibly.

Besides reducing their nesting areas, we also destroy their habitat and attempt against their lives when we let the garbage get into the ocean. And this is not always done intentionally. Sometimes the high winds that strike the coastal areas take our papers, napkins, plastic cups, among other trash, into the ocean inadvertently. Therefore it is paramount to carefully check what materials are the ones that wind can take away and put them in proper containers. Such simple details make a big difference.

Remember that for every piece of handicraft made of sea turtle that you use, there is one less of them in the ocean.

If you like the material they get from hawksbill turtles but you do not want to contribute to their capture, there are many imitation objects that you can acquire and that are visually similar. They are made with resin blends and acrylic colors to give it that natural look. Its use is entirely legal, and you can identify it by its price; The original turtle material is more expensive than the resin, and usually, in the unauthorized stores where they sell such articles, there are turtle shells or other objects that will give you a hint that it is an illegal business. Remember that for every piece of handicraft you use, there is one less sea turtle in the ocean.

Another demanded item are sea turtle eggs. Some people believe that their consumption increases fertility or sexual desire, but it is not proven medically, on the opposite, research has shown that they damage our health because of their extremely high content of cholesterol several times more than chicken eggs.

A sea turtle egg has 20 times more cholesterol and fat than a chicken egg.

Additionally, the eggs have high concentrations of polychlorinated biphenyls, an organic chlorine compound that affects the nervous system and the memory. As if all this were not enough, they have another devastating effect on our body; one single turtle egg has up to 20 times more cholesterol and fat than a chicken egg. As we know, high amounts of cholesterol increase the risk of heart and cerebrovascular conditions. Is it worth trying to increase sexual desire in return for devastating side effects? The only outcome will be a disappointment, the deterioration of your health and several turtles that never had a chance to live on this planet.

If we spend more time reading about the problem of the critical danger of sea turtles and other members of the animal kingdom, we could take some actions and improve our knowledge on behalf all the living beings that inhabit our planet.

The false beliefs that can cause irreversible damage to your health, and the consumption of illegal products will make you an accomplice to the organized crime, so it is in your hands to end it or encourage them to continue trading with sea turtles. Without consumers, crooks would not kill sea turtles, and without action, there are not solutions.

However, the good part of the relations between sea turtles and humans are the thousands of conscious people that volunteer to support sea turtle survival. Some help to watch the beaches to protect the mothers when they arrive to lay their eggs and then protect the area to avoid damages to the eggs.

Other people help to work in the shelters where injured sea turtles rescued from entanglement or confiscated from criminals are taken to recover before returned to the ocean.

In these places also arrive some sea turtles with nasty wounds made by the boat propellers which although probably not intended is another sample of habitat invasion of humans besides coastal development. As sea turtles swim close to the surface when they are close to the coast, they are easy victims of boats especially in places with high traffic.