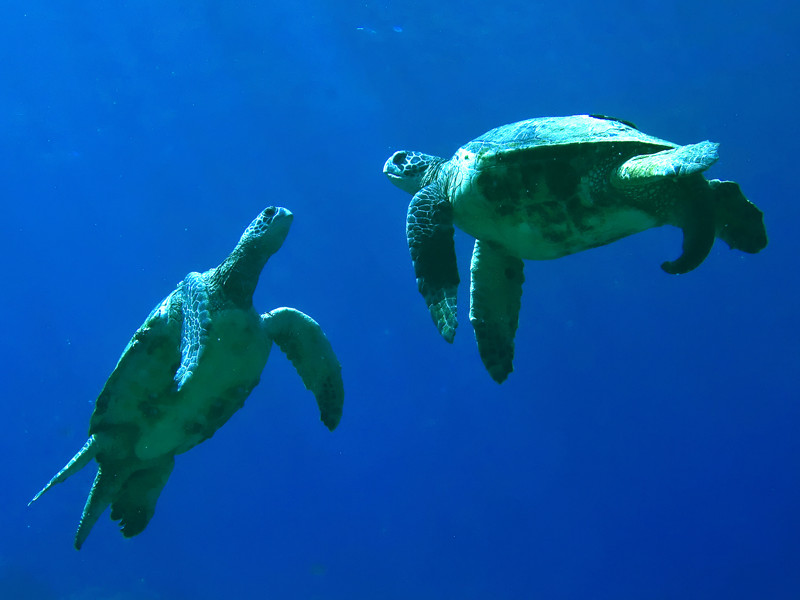 Sea turtles are not a highly social species as we can see in other animals, but at certain stages of their life cycle, some congregate in shallow waters.

The first contact they have with each other is at birth. The hatchlings are grouped, instinctively looking for the sea. Once achieved the objective, they separate and do not socialize again with other turtles until mating. In some cases there are high concentrations of algae or marine plants that attract a large number of birds and feed at the same time massively; Once they have finished eating, they return to their solitary life.

Sea turtles do not have a permanent social structure; each turtle lives alone and confronts the dangers found in their marine habitat this way. They are not aggressive and share habitat with a large diversity of species without claiming territory or showing signs of aggressiveness.

Males do not represent any social hierarchy or have any ranking. Several of them mate with a single female, and there is not any status order since she is the one who decides whether she wants to mate with a certain individual or not.

Sea turtles do not have a stable social structure and males do not represent any social hierarchy.

Sea turtles perform one of the most incredible migrations of the animal kingdom. Swimming hundreds or thousands of miles towards the nesting beaches is already impressive, but the fact that females return to lay their eggs on the same beach where they were born is unquestionably exceptional. Knowing this information is critical when developing conservation strategies on the beaches where they arrive to spawn, as well as maintain an accurate monitoring of populations and a strict surveillance to protect them from poachers.

Each species has different migration routes. In the juvenile stage they stay in areas close to the coast, but once they reach adulthood, they move to new feeding sites. When the mating season arrives, they migrate to the nesting beaches, where the females leave the sea to enter the sandy beaches in search of suitable spaces for laying their eggs.

The leatherback sea turtle has the record for the longest distance traveled during the migration: 9,700 km, from Indonesia to the United States.

The leatherback sea turtle holds the record for the longest distance traveled during migration among all species; About 9,700 km, from Indonesia to the United States. The loggerhead turtle, on the other hand, migrates from Japanese waters to Baja California, Mexico.

For years scientists have wondered how a sea turtle can find the small portion of land where it was born; For almost any species it would be impossible to find the same place in such an enormous ocean and after several years. Still today the answer to this question is a mystery, but some believe it is related to the ability of these reptiles to detect magnetic fields, ocean currents or water chemistry.

The inborn behavior of turtles begins at birth when they instinctively perform a migration from the nest to the ocean. We have to remark that they do not know the sea, but as soon as they leave the egg, they know its direction. Getting away from the beach immediately to reach the water is a survival instinct to avoid the predators that are anxiously expecting their birth.

Once they are born, the small turtles move without stopping for the first 24 to 36 hours to reach the waters of the coast initially and then the feeding sites in the ocean. This behavior has the name of the “frenzy period.”

Young turtles stay near the coast in feeding areas while they mature. Later, when they reach a certain age, they make a trip to the permanent feeding areas of their species to return in the future to the beaches that saw them born.

Turtles have different journey patterns that we can group in three different models:

1. The leatherback and the Olive Ridley sea turtles roam random places before returning to the breeding areas.

2. The Kemp’s Ridley, loggerhead and flatback sea turtles migrate between a group of defined feeding areas and their breeding sites.

3. The Hawksbill and green sea turtles travel between the same feeding sites and their nesting areas.