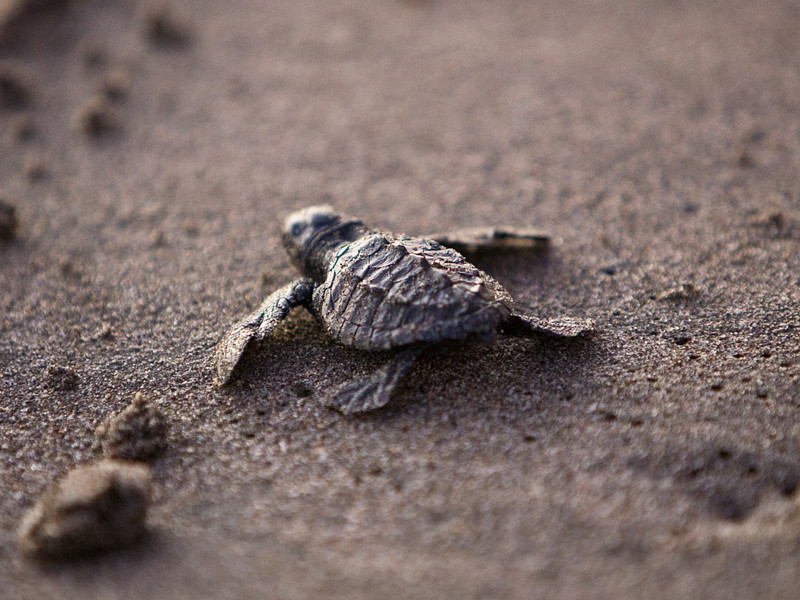 Many researchers are continuously doing investigations on sea turtles and yet there are several unanswered questions, such as specific details about their migration routes and patterns or certain stages of their life which are unknown as well as their behavior during them.

What we know is that they are reptiles with excellent abilities and amazing aquatic adaptations that no other marine organism possesses. Their origin date back more than 200 million years, according to the fossils discovered that helped to reconstruct what once was part of its natural habitat to understand the evolutionary process that led them to be what they are today.

Sea turtles reach sexual maturity at an old age compared to other species of the animal kingdom, and scientists have estimated their longevity monitoring several individuals, although they have not been able to establish a definitive range of life expectancy. Their antisocial behavior and the fact that only the females arrive at beaches, do not help to analyze their population trends with a full perspective.

Six sea turtle species are in danger of extinction, and there is not enough data on the number of individuals of the last one to determine its conservation status, but it is likely in the same condition.

Fibropapillomatosis is a disease specific of sea turtles that produce benign tumors mainly in the outer tissues that affect their health. This condition is subject to research because the cause of their appearance is unknown. The best hypothesis is that an herpesvirus causes this disease but how they get it is not determined. Some scientists think that leeches, snails or some other type of marine organism are the transmitters of this virus as they have a constant relation with these chelonians. Some others, associate these tumors with problems of oceanic contamination.

Besides these external tumors that bring mechanical problems to sea turtles like obstructing their vision or interrupting their feeding process because they reach up to 30 centimeters, approximately 25-30 percent of the turtles with external tumors, also develop them internally close to the heart, lungs or kidneys.

The incidence of this condition is bigger in green sea turtles (Chelonia mydas) especially to those living in warm tropical waters where almost 70 percent of the population has the disease. This alarming rate and spread have reached levels of a panzootic, an outbreak of an infectious disease in animals, the equivalent of a pandemic in humans.

However, this disease is not exclusive of green turtles, and all the remaining six species also develop these nasty tumors although the affected population rate is not as high as in Chelonia mydas.

The conservation status of sea turtles is beyond alarming. Six species are under threat of becoming extinct, and the last one, the flatback sea turtle (Natator depressus) does not mean that it is safe, there is not enough data on the number of individuals to determine its status, but it probably is in the same condition than its relatives. Some species have extremely alarming population figures, with a rapidly rising mortality rate.

Considering their evolutive history of about 200 million years and surviving nine major extinction events, including the famous cretaceous-Paleogene when the dinosaurs disappeared, is alarming that they could find their end during this ongoing process that known as the Holocene extinction event which is caused by Humans.

Sea turtles are relevant from various angles, cultural, educational, biological, ecological and others.

Protection and preservation activities by governmental and non-governmental institutions include the creation of facilities where they focus on studying these reptiles to know their biology, migratory movements, reproduction and population densities. All this helps to educate society about the importance of its conservation in the marine fauna.

Environmental organizations have seized eggs, live specimens sold as pets, shells, among other items obtained from sea turtles, all thanks to inspecting beaches, markets, restaurants and craft stores to deter people from fomenting such illegal trade. There is a lot of information about this problem where we can learn to participate in the preservation campaigns.

Research on their conservation status has served to create new fishing strategies that are safer to sea turtles. Some fisheries already use smart fishing trawls in some parts of the world. However, broader diffusion and acceptance is paramount to become widely used by all companies dedicated to this activity to implement this new technology for the benefit of these species.

However, in some places, the newest technology is not affordable by the boat owners, but a little bit of good will can help to save a lot of turtles. Research has found that the speed and length of the trawling method are crucial to let turtles avoid bycatch. Tow duration of 10 minutes, only kills about 1 percent of the trapped turtles while increasing the time to sixty minutes results in a 50-100 percent of deaths.

The turtle excluder device (TED), is an adaptation to shrimp fishing bottom trawls that allow sea turtles to escape if trapped by nets. Although created since the 1970s, this device was not widely accepted by the industry, and it was up to 1983 that the United States ordered its use by law, but several other countries still have not done their job implementing this kind of legislation.

In both physical and digital libraries you can find a lot of scientific and entertaining documentation about the life of sea turtles, as well as the threats that keep them in danger of extinction. The National Oceanic and Atmospheric Administration (NOAA) have several documents about the various species of sea turtles on its website where you can get the knowledge to understand their current situation.

for kids, there are interactive books where they can learn about the importance of sea turtles and adopt since childhood the conservation actions, which will help them in the future.