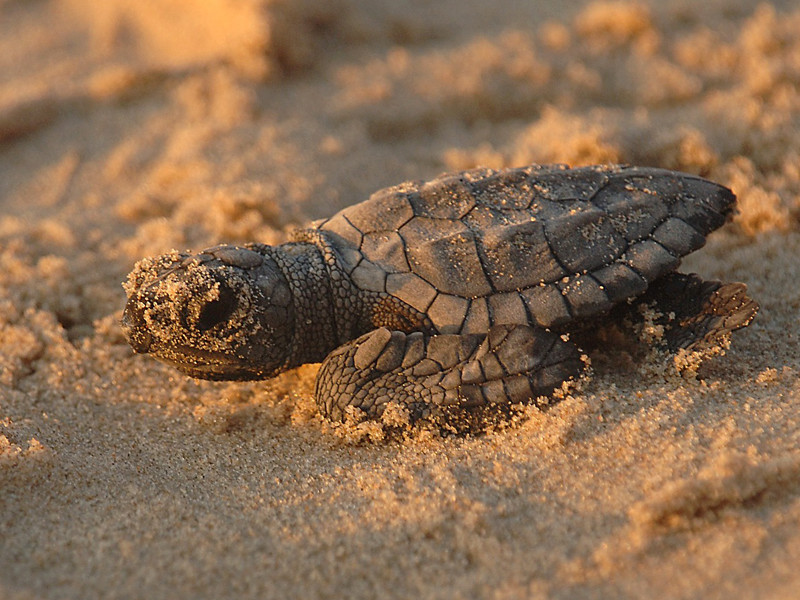 The breeding process of sea turtles is fascinating. It all begins when they migrate thousands of miles to the breeding sites, to find a partner for mating. Once a male find a female candidate, the former courtship her by maintaining physical contact with the flippers or slightly biting the neck and the tail. If she does not accept it, then she submerges and tries to flee, but if she agrees, the male climbs on the back of the partner’s shell and holds it with its front claws to perform the sexual intercourse. This action is carried out underwater very close to the surface, or at the surface.

Many females have claw marks on their flippers, and although this is believed to be painful for them, it is part of their nature.

They maintain genetic diversity in the population since the eggs are the product of several fathers.

Females mate with several males and store their sperm for a few months. According to scientists, this helps to maintain genetic diversity in the population, since eggs are the product of several progenitors. 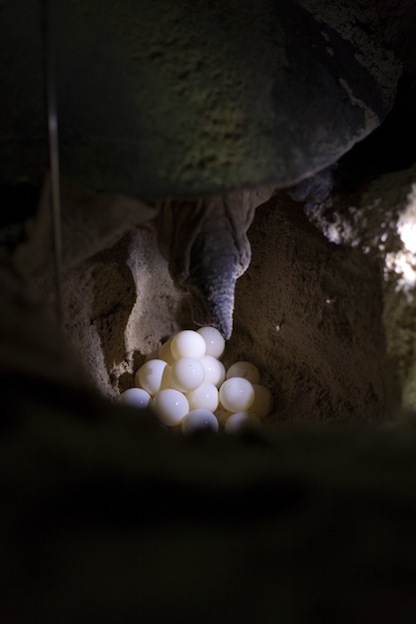 A female green sea turtle laying its eggs in a nest at the beach.

When the mothers are ready to lay the eggs, they head to the beach. The most remarkable characteristic of the nesting season is that they return to the same beach where they were born. In some species, this occurs massively and is known as “arribadas” where hundreds of females leave the waters to move through the sand to select a safe place for their eggs. Once settled, they begin to dig a hole with the help of their rear fins and lay the eggs in the nest.

Females do not cry when laying their eggs; they just excrete excess salt through their eyes.

Finally, they cover the nest with the same sand and return to the ocean. During this spawning process, which is usually at nights, females excrete excess salt through some glands in their eyes, which led to the misconception that they were crying because of the pain while laying the eggs, but this is entirely false. Unlike females, the males never participate again in the reproduction process, and they never have to leave their habitat, so that their whole life stay in the ocean.

Most sea turtle species nest at least twice during the breeding season and the number of eggs in the clutch vary according to the species, ranging from fifty to over three hundred. The distance they travel in the sand is very exhausting, and it is evident the difficulty that this represents for them because their physical characteristics are mainly for the marine environment. As we know, they do not have legs, but flippers, something that is not very useful on land. 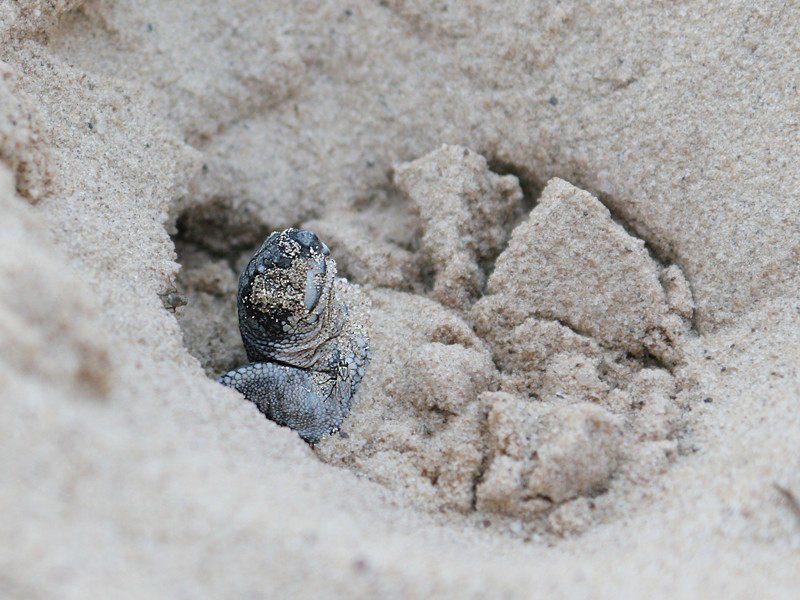 Leatherback sea turtle hatchling about to begin its journey towards the sea.

The composition of the eggs is very different from what we commonly know. Their shell is not hard like those of birds. Instead, the cover is flexible, which prevents them from breaking when they fall from the cavity of the female to the nest. During spawning, two or three eggs come out at the same time covered by a transparent and dense mucus. The temperature of the nest will define the sex of the offspring; If the temperature is cold, males are likely to be born, but if the nest is warm, they will be females. Hatching begins approximately 60 days after laying.

Another shocking detail during this reproduction process is that once the females have finished laying the eggs, they never look at them or have any contact with them ever again. They could probably meet themselves again in the immensity of the ocean, but if that happens, they won’t show signs of recognizing each other.

If the temperature in the nest is high, the offsprings will be females; If it is low, then they will be males.

Conservationists who watch nesting beaches for sea turtles do not allow people to get close to the females that are laying eggs. It is though that any disturbance could alter the natural process, although some researchers use these moments to take body measurements, count the number of eggs and observe reproductive behaviors considered very useful for science and conservation.

After all the incredible effort involved in the reproduction process, the real drama of sea turtles is the fact that only 10% of the offspring manage to reach the adult stage because of the high mortality rate since they are in the shell. Many of the eggs cannot develop because predators eat them, or kill many others within a few minutes of being born.

This low survival rate besides the fact that they take decades to reach sexual maturity makes them very vulnerable.

Scientists do not yet have accurate data on sea turtle longevity, but once they reach sexual maturity, they are said to have up to 30 years of reproductive life; That is, if the specimen reaches maturity at 45 years of age, its life expectancy could be around 75 years.