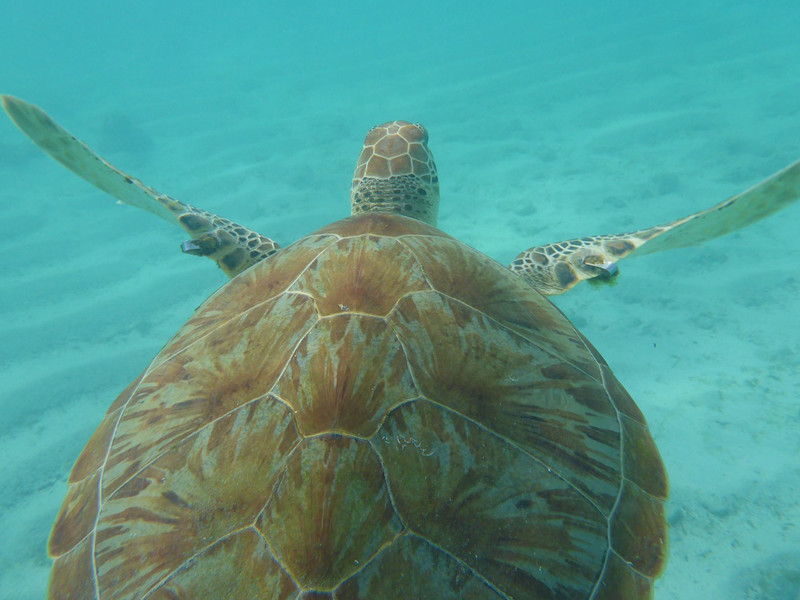 Sea turtles belong to the order Testudines whose first specimens date back to about 220 million years ago, making them one of the most primitive groups of reptiles that still inhabit the earth. This order is part of the class Reptilia, which also includes animals like snakes, crocodiles, and lizards. The species “Odontochelys semitestacea” is the oldest turtle species to date, with fossil remains that are from the Triassic period. Scientists believe that they were aquatic animals because of the characteristics of the vestiges found.

In the line of their taxonomy, they also belong to the suborder Cryptodira which includes part of the terrestrial and all the aquatic turtles; The taxonomical separation between terrestrial turtles and sea turtles occurs in the superfamilies, where Chelonioidea gathers the type of turtles that at this moment are of our interest: the sea turtles. Finally, they split into clades and two extant families, which are the Cheloniidae that includes six of the seven species that exist today and have the characteristics hard shell made of bony plates and the other family is the Dermochelyidae that only includes the leatherback turtle, which has a shell made of soft leathery tissue.

According to scientists, sea turtles come from land turtles and freshwater turtles that lived about 230 million years ago in the Cretaceous period.

Odontochelys semitestacea is the oldest turtle species to date, with a fossil from the Triassic period.

The origin of sea turtles dates back to the late Jurassic about 150 million years ago when the genus Plesiochelys lived and later during the Late Cretaceous when the Angolachelys genus turtles lived, however, none of these are ancestors of the current species, and all their descendants are extinct.

What caught scientists’ attention about this discovery is that the species, although ancient, is not primitive, that is, probably new fossils of more primitive species are likely to be discovered.

Before the finding of the fossils of this species, Santanachelys gaffneyi was the oldest ancestor and was the reference in scientific writings, but Desmatochelys padillai is about 25 million years older, becoming the oldest sea turtle fossil.

Remains of the species Archelon Ischyros found, prove that it was a huge reptile of almost five meters long with 2,200 kg of weight (4,850 lb), whose closest relative today is the leatherback turtle, where we can still observe a prehistoric appearance. The fossils date back about 75 million years ago and are said to inhabit the waters that are currently part of the American seas.

When the planet was younger, and the continents and oceans were not yet defined as we know them, and there were not any resemblance of human presence, enormous and wild animals already populated the earth. Turtles, both marine and terrestrial have a great history and evolutionary adaptation modified by the climatic and geographical changes that the planet has experienced.

Probably the toughest tests that sea turtles had to pass was the mass extinction of the Cretaceous-Paleogene about 66 million years ago that ended the life of the dinosaurs and three-quarters of the animal and plant life on Earth. During this event possibly caused by the impact of an asteroid, no tetrapod greater than 55 lbs (25 kg) survived except sea turtles and crocodiles. This example allows us to see the degree of adaptability of these reptiles.

Thanks to the current technology, digital reconstructions of the species that once lived in those eras have been possible. With this we can have an approximate idea of ​​its external appearance, its size, and physical characteristics and, on the other hand, the scientists study in detail the elements that are no longer present in any of the seven existing species due to evolutionary processes.

CLADOGRAM OF THE PHYLOGENETIC RELATIONS OF THE LIVING AND EXTINCT SPECIES OF THE CHELONIOID SUPERFAMILY.