As its name indicates, it is a turtle with a greenish appearance in its anatomy. Both the carapace and the skin, have a green olive color which diffuses until a pale yellow in the area of ​​the plastron. This yellowish color also appears in the mouth, nose, neck and the outline of the entire shell.

The weight of the adults ranges between 35 and 50 kilos and the length between 55 and 80 cm.

The offspring, meanwhile, have a weight of 28 grams and measure 4 cm at born having a much darker color than the adults, with a combination of blue and gray at the edges of the flippers and the shell.

The Olive Ridley sea turtle is the only species with a variable amount of plates in the carapace, having between five to nine lateral scutes on each side and 12 -14 marginal scutes.

This turtle has large claws on its flippers, and despite being olive green, sometimes it looks reddish due to the concentration of algae that adheres to the carapace.

They are a migratory species that travel to the nesting beaches every year. 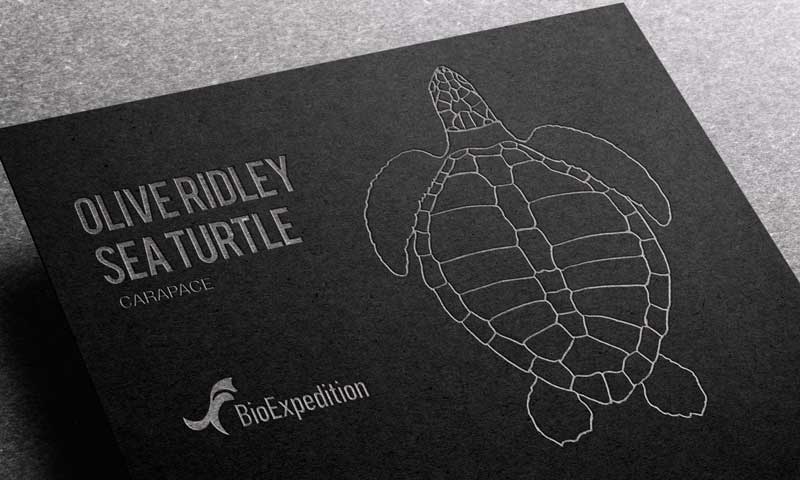 On the Rushikulya beach in India, during massive arribadas up to 200,000 turtles can arrive together to nest.

This sea turtle dwells in the tropical regions of the Indian, Pacific, and Atlantic oceans, excluding the Caribbean Sea.

The distribution of the Olive Ridley sea turtle reach several oceans throughout the world, and nest in about 40 beaches, but the arribadas only occur in Mexico, Panama, Nicaragua, Costa Rica and India.

These “arribadas” are concurrent arrivals of hundreds or thousands of turtles to nest at the same beach. At Rushikulya beach in India, there have been arribadas of up to 200,000 turtles, a magnificent natural spectacle.

They stay within 15 kilometers off the coast, preferring shallow waters to find food and take the heat from the sun. They also inhabit bays and estuaries.

Their diet is varied and includes several marine species like lobsters, crabs, shrimp, some types of fish, snails, and jellyfish. Incredibly the behavior in captivity becomes entirely different since there have been cases of cannibalism. They are mostly carnivorous when they have not yet reached the adulthood.

They also eat seaweed when prey is not available and can submerge up to 150 meters to find their food.

Like some other species of sea turtles, female olive ridley sea turtles return to the same beach when they hatched years before to lay their eggs.

Couples mate very close to the coasts. Nesting seasons occur from June to December, and in some regions synchronization occurs very accurately, resulting in hundreds or thousands of females reaching the beaches at the same time, to find a suitable place to lay their eggs. This event has the name of “arribadas” as mentioned above.

However, not all females arrive in groups to spawn their eggs. Some others are completely alone when reaching the beach to nest. The reason why some prefer to nest in arribadas and others in loneliness is unknown.

These turtles usually nest during the nights and dig a hole in the sand up to 55 cm deep where they will lay about 100 eggs. As all the species of sea turtles, the nest temperature will determine the sex of the offspring.

During a single season, a female lays two or three sets of eggs.

The offsprings are born after 50 or 60 days, and since they are born, they have to take care of themselves, avoid predators and instinctively look for the way to their new home, the Ocean, as the mothers do not protect the offspring have no contact with them ever.

In some places in Africa and Asia, sea turtles are respected and appreciated as sacred animals, so they severely punish acts that threaten their lives.

It is considered the most abundant species of sea turtles, but unfortunately, also one of the most threatened and in danger of becoming extinct in just a few years.

Estimations presume that there are about 800,000 nesting females, but the numbers descend at a very alarming rate, so they continue decreasing. While this could seem like a large number if compared to other species, the vulnerability comes from the fact that some populations are small without any chance to survive.

In many parts of the world they are strictly protected against any human act, however, in many regions with little surveillance, this is uncontrolled, and some people still harvest turtle eggs which sell in the black market as aphrodisiacs and the meat as an exotic delicacy.

In addition to this, the fishing nets left in the ocean and pollution, interfere with their natural life cycle and cause them irreversible harm. Fishers using trawling nets, incidentally kill hundreds of sea turtles that although returned to the sea they are already dead or severely injured. Artificial lighting in urbanized areas causes both females and offspring to become disoriented on their way to the sea, which makes them stay longer on land for the benefit of terrestrial predators.

Although the species has a conservation status as vulnerable, in some parts of the world, this turtle is critically endangered because the populations in such area have dramatically reduced. Whatever the case, the truth is that many factors put at risk the survival of this beautiful marine reptile.