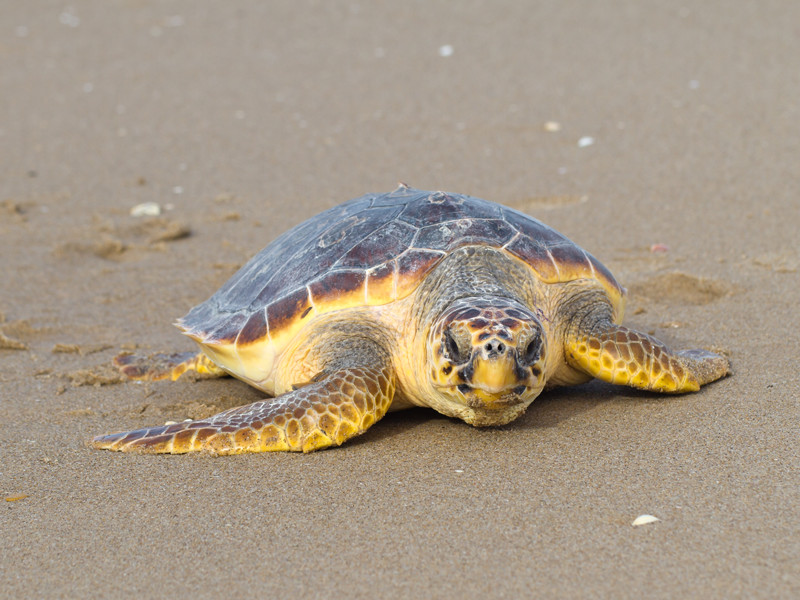 This species is the second largest sea turtle just after the leatherback and the largest hard-shelled. The shell has a diversity in color blends that go from orange to reddish-brown and yellow and differs from all other species for presenting a unique design on the carapace; A row of five plates or scutes in the midline, and five on each side. The head and flippers have well defined brown spots.

Besides the previous characteristics, the loggerhead sea turtle can be identified because its carapace has a resemblance to a heart-shaped figure and its head es relatively long which gave it this colloquial name.

The other part of the shell is the plastron, the flat ventral area of the turtle which is made up of bones and has a light yellow color. Adults are usually between 70 and 100 cm long and weigh between 80 and 200 kilos. Sexual dimorphism is visible in the tail and claws of adult males, which are longer than in females.

They coexist peacefully with other marine animals like pilot fish, remoras, and parasites that adhere to their shell.

The Loggerhead sea turtle has the second most rigid shell in the world.

The loggerhead sea turtle inhabits the temperate and tropical zones of the world with waters that have temperatures between 13° to 28° C (56-82° F). The Atlantic, Indian and Pacific Oceans, as well as the Persian Gulf and the Mediterranean Sea, are the main places where they dwell.

If they are not in the open ocean, they frequent the coastal waters, the mouths of rivers and coral reefs.

Oman is the place with more nesting females while Florida is a preferred nesting site for loggerhead sea turtles in the US, with more than 67,000 nests built each year.

Other common nesting places include Brazil and Cape Verde in Africa. In the mediterranean sea, they visit the beaches of Greece, Turkey, and Cyprus. While there are several other places and countries around the world where loggerhead sea turtles go to nest, the number of nesting females has been declining dramatically over the years.

Adults are carnivorous and feed mainly on crabs and mollusks such as the giant clam, but also supplement their diet with seaweed, sponges, sea worms, jellyfish, squid, sea anemones, shrimp, sea urchins and fish eggs, among others.

Their mighty mouths also allow them to feed on prey with hard shells, such as snails and horseshoe crabs. 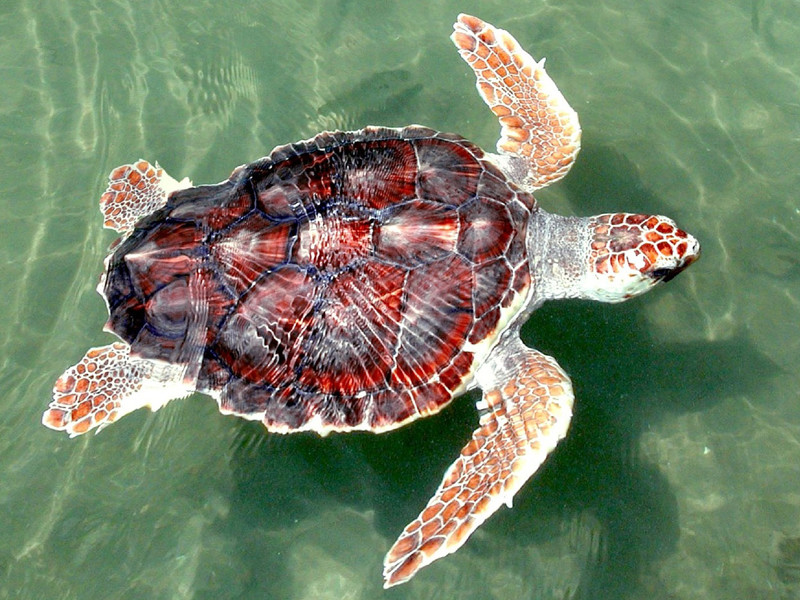 They reach sexual maturity at around 35 years of age. Copulation is a bit violent compared to other species of the animal kingdom since the male usually bites the neck or the flippers of the female to be accepted. If the latter refuses to mate, it covers its cloaca and moves towards the bottom of the sea. If the male is persistent, it will wait for the female to reach the surface to breathe and it will try again.

When finally accepted, males cling to the females with the help of their claws and start mating, a process that can last for hours. It is very common to carry out confrontations during breeding, where the male coupled has to bite intruders who want to replace him. Once they finish, another begins copulation again with the same female.

The nesting season begins between April and July, in which a female spawns three to seven times per season. Each nest contains several eggs that hatch after about 60 days.

Females can nest three to five times every season laying between 40 and 200 eggs, and according to research, they breed every two years.

Once born, the hatchlings find their way to the ocean in a path that is full of dangers and predators. As soon as they leave the egg, the hatchlings start moving their flippers continuously for several days, a time known as the Frenzy period, to get as far from the beach as possible.

Eggs and offspring suffer a high rate of predation, but this reduces as their body size increases. They have a life expectancy of 47 to 67 years of age.

The cloaca is an orifice which is the only exit of the digestive, reproductive and urinary systems.

They sometimes are victims of some bacterias such as salmonella and pseudomonas which attack eggs and offspring. Funguses appear in nests, and cloacas, as well as parasites that manage to adhere to the shells. In other cases, they develop tumors both internal and external which prevent them from performing their most basic functions. Some of these tumors grow close to the eyes causing permanent blindness; Parasites of the Spirorchiidae family affect the heart and the brain. Small marine organisms and about 37 species of algae can inevitably live in the shells of loggerhead sea turtles. 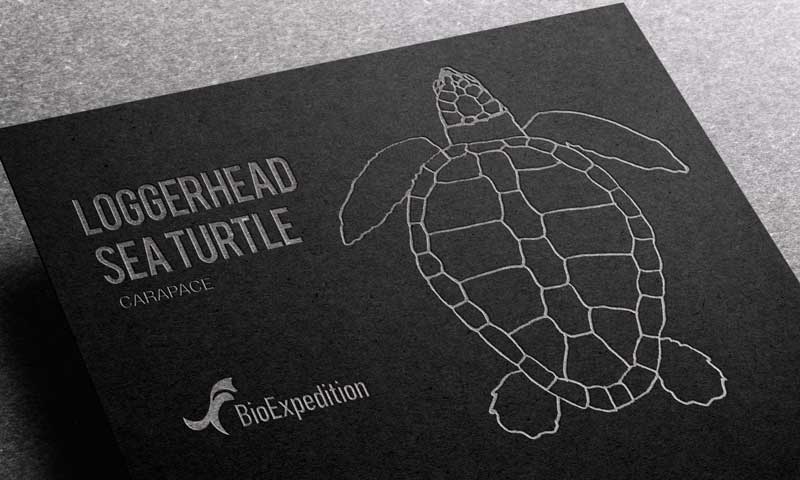 Bycatch by commercial fishing is an alarming problem, as it is becoming more frequent. Gillnets, trawls, longlines and other fishing gear continuously take a toll of sea turtles when trying to catch other species.

Egg harvest and direct hunting for meat consumption are also another direct threats to their survival.

The loss and degradation of their habitat due to coastal development are other concerns that contribute to their critical situation.

Finally, the climate change has been affecting all the species of sea turtles and obviously the loggerhead. The reduction and the shifting habits of their usual prey cause them to change their migration patterns.

This species has a “vulnerable” conservation status on the Red List of the International Union for the Conservation of Nature (IUCN) even though is under protection in most of the places where it inhabits and nests. Laws in these locations severely punish the theft of eggs for commercialization, but it is still frequent in several regions where inhabitants live from this activity.

Fortunately, new designs of fishing nets already exist which contain appropriate openings that allow sea turtles and other marine species accidentally caught to escape without suffering any damage. These nets have already been tested with sea turtles and had a favorable result, so now the goal is to convince fishers to adopt them.