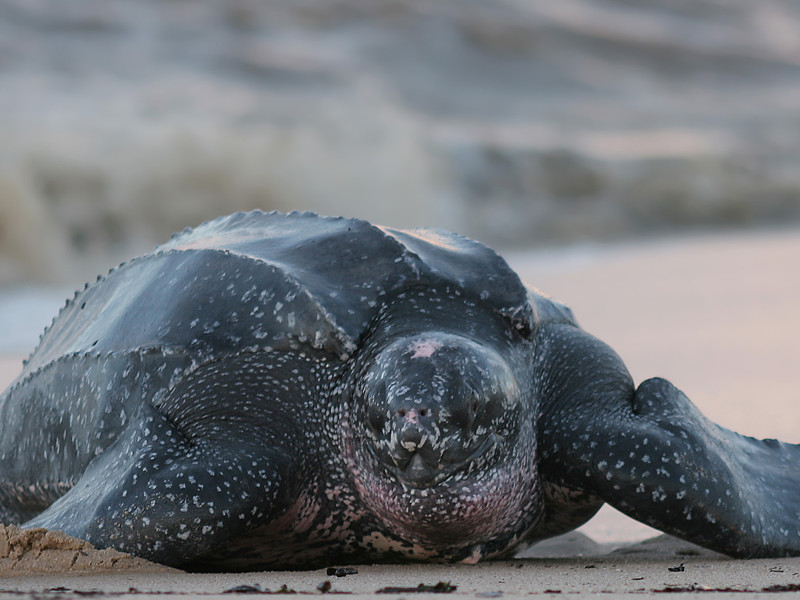 It is the largest known sea turtle species and is the fourth largest reptile in the world, only after three species of crocodiles. It is also called lute turtle or leathery turtle.

Its skin and shell are black or dark gray with white spots scattered all over its body from the head to the rear flippers.

The leatherback sea turtle does not have a hard shell like the other six species. Instead, it has a 1.5 inches thick tissue which creates a carapace of skin and fat with seven clear divisions made by five vertical ridges along it.

This turtle has large front flippers which have a record of 2.7 meters long in the largest individual seen.

It does not have a rigid shell as the other sea turtles, but a cover of skin and fat.

They measure from 1.80 meters to 2.2 meters long, and their weight varies within a range of 250 to 700 kg, although extremely impressive specimens found, measured up to three meters in length and had a weight of 916 kilos.

They can submerge to 1,280 meters and remain under water for 85 minutes. Like all turtles, they do not have teeth but sharp edges in their mouth that help them to hold their prey firmly and tear off the sea plants.

Its distribution includes tropical, subtropical and subpolar seas. They are a migratory species whose distances traveled vary according to the geographic location of its habitat. Pacific species, for example, can travel up to 9,700 km. from Indonesia to California a trip that can take them between 10 and 12 months to complete.

These sea turtles are open ocean animals which stay away from the coast most of the time, but sometimes approach it when looking for food. 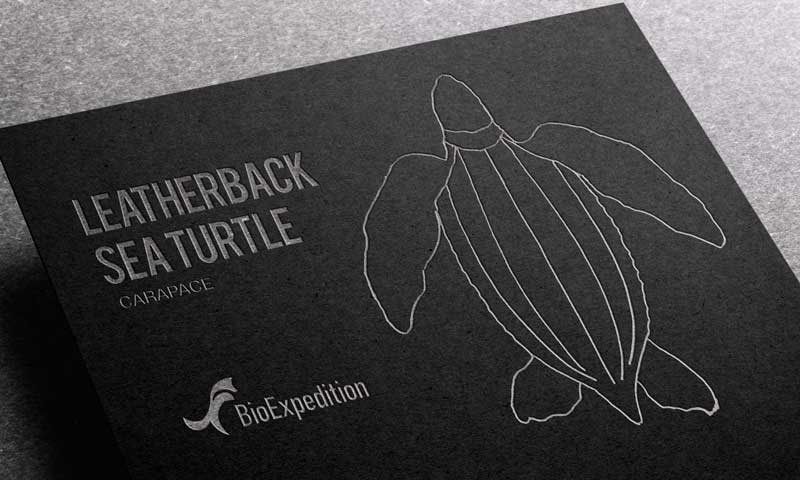 As this species is immune to the poison of jellyfishes, it consumes large amounts of them, which helps to regulate the populations of these animals that reproduce at a very fast pace in some regions and feed on fish eggs, an evident inconvenient for the fishing industry. Large specimens can eat up to 200 kg of jellyfish a day.

They supplement their diet with small fish, crustaceans, cephalopods, snails and sea urchins, but adults almost rely exclusively on jellyfish.

They are immune to the poison of jellyfish, and therefore they consume this animal in large quantities.

They do not have powerful muscles in their mouths unlike other sea turtle species, and their esophagus is equipped with downward directed spines to prevent gelatinous jellyfish from escaping when the turtle ingest them.

A single female reproduces with several males, and these move their flippers or bite them to show their receptivity.

The females of other sea turtle species usually return to the beach where they were born, but leatherbacks typically choose other places. They come to the sandy coasts at night and lay their eggs ranging in quantity from 50 to 170 and cover them with sand to moderate temperature and humidity. It is the only protective action performed by the mothers in this and all sea turtle species since once they are born, the offsprings have to survive on their own. They can do this 4 or 5 times during the breeding season with and interval of 8-12 days between deliveries.

However, female turtles do not nest every year; they do it every two or three years.

The temperature determines the sex of the offspring. Females will be born if the temperature inside the nest is warm, and males will develop if the nest has a cold temperature. After an incubation time of approximately 60 days, the hatchlings start the frenzy period when they look at the ocean and make a dangerous migration between their nests and the sea. 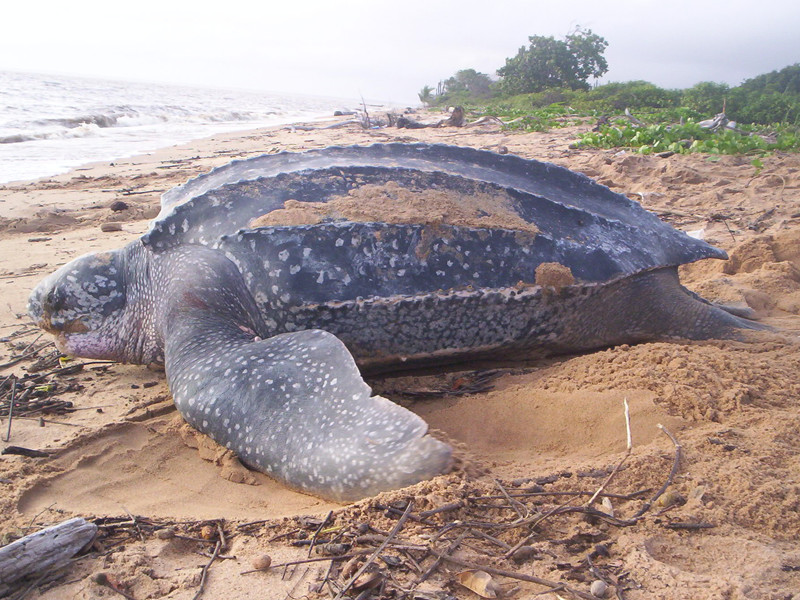 Due to the large size of this species, it does not have a lot of predators in their natural habitat, but large sharks and orcas attack them if they do not find another prey.

There are approximately 25,000 breeding females worldwide left in the wild, but the numbers of all subpopulations have been falling dramatically during the last years, and in some places like Malaysia which in 1968 there were about 3,000 females every year, they are practically extinct from the area. And the same is happening in several locations where they used to arrive to lay their eggs.

The leatherback sea turtle is a species that has survived million of years, and now it is a species classified as Vulnerable according to the Red list of the International Union for Conservation of Nature (IUCN).

The main reasons why the leatherback sea turtle is under this delicate conservation status are:

Bycatch.
High numbers of turtles are caught incidentally by fishers who are looking for other types of marine wildlife. Likewise, it is very common that long fishing nets are left in the sea and cause distressing moments of despair in these reptiles that when they want to free themselves, they become even more entangled.

Harvest the eggs.
In many parts of the world, some people believe the false myth that sea turtle eggs are aphrodisiacs. Their sale is completely illegal, but they are still available in the black market. The only way to avoid this is to stop consuming them.

Loss of habitat and pollution.
Changes in beaches due to coastal developments seriously affect females looking for appropriate nesting sites. Also, the human activity generates large amounts of garbage that most of the time is not controlled, causing problems for the marine species that live in the zone.

While there are several actions to protect this and all the species of sea turtles, it is probably too late for that, and the unstoppable reduction of populations seem to indicate that they won’t save from extinction.