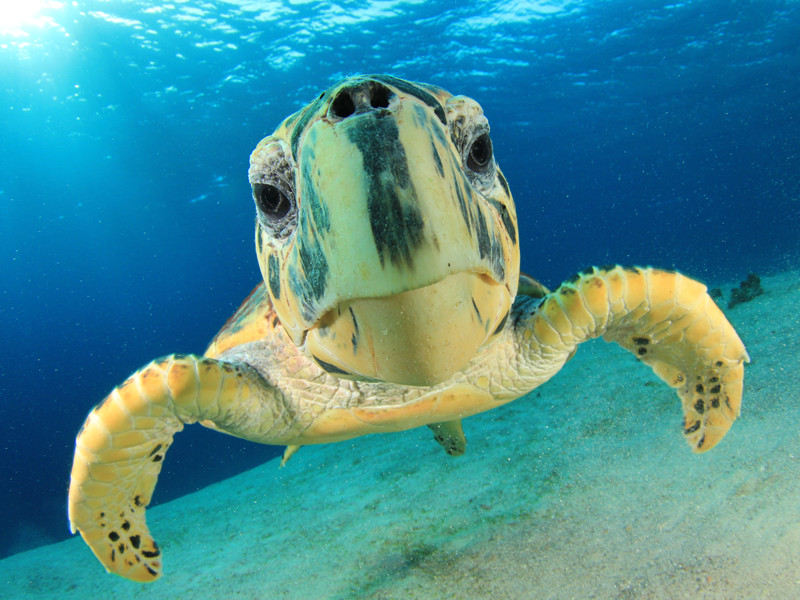 Although at first glance the hawksbill sea turtle can be confused with other species of sea turtles, it has specific parts of its anatomy that distinguishes them from all the others. One is its shell with saw-shaped edges and the design of its mouth ending with a sharp curving beak; Characteristic which got its colloquial name.

The carapace features dark colors in tones of brown, orange, red and black, while the plastron or bottom is light yellow. Males have longer claws on flippers, thicker tails and brighter colors than females.

They grow up to one meter long and weigh 45-80 kg. The largest specimen ever captured had a weight of 127 kilos, but it was an exceptional case. The offsprings have a brown color measure only about 4 cm and weigh 15 grams, which is why they are easy prey for predators.

Their nesting sites include about 70 countries, but they inhabit the waters of at least 108 nations.

They dwell in tropical waters of the Pacific, Atlantic and Indian Oceans and keep close to the coasts. They are a migratory species that do not follow a defined route. Their nesting sites include about 70 countries, but they inhabit the waters of at least 108 nations.

Coral reefs are some of their preferred places within the marine environment since they have lots of sponges, seaweed, and seagrass. They also like rocky areas, bays, sandbanks, and mangroves. 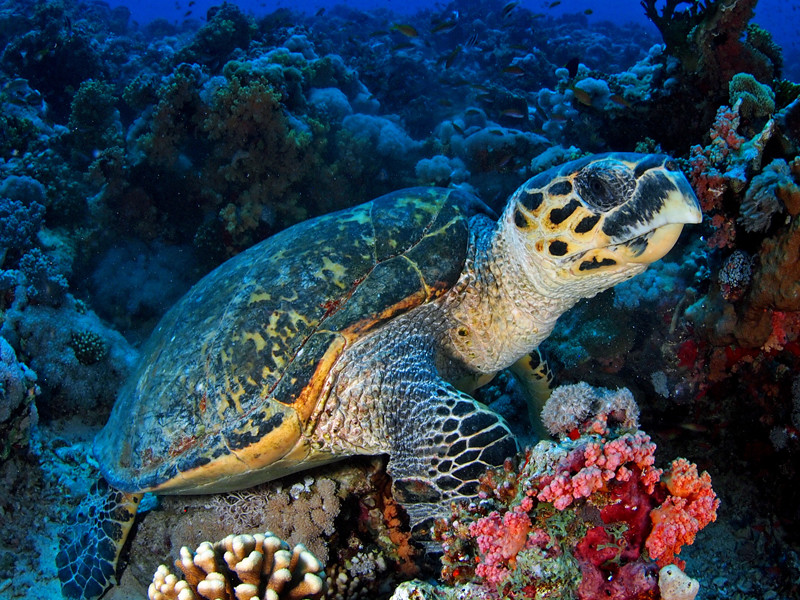 They eat more than 500 kilos of sponges each year.

The hawksbill diet varies according to the region it inhabits and the type of fauna available in the area. For example, in the Caribbean, they feed mainly on sea sponges; adults are avid consumers since they can eat up to 544 kilos of these animals in a year. Those living in the waters of the Indo-Pacific, often consume a varied diet that includes sponges, seaweed, and various invertebrate organisms.

Very few marine animals have the opportunity to feed on jellyfish due to the toxicity they have, but the hawksbill sea turtle consumes them without a problem. They also supplement their diet with several species of fish and shellfish.

Mating occurs every two or three years and is carried out in shallow waters. The nesting process takes from one to three hours, from the time the female leaves the sea to select the place where it will lay its eggs until it returns to the water. Incredibly, some of them perform the whole procedure in just 45 minutes, faster than any other species of sea turtle.

Nesting seasons vary by location but commonly occur between April and November. A female builds three to five nests (at different times) in which she deposits about 130 eggs. These incubate for about two months, and finally, the offsprings perform the arduous task of leaving the egg, going to the surface of the sand and heading to the ocean. 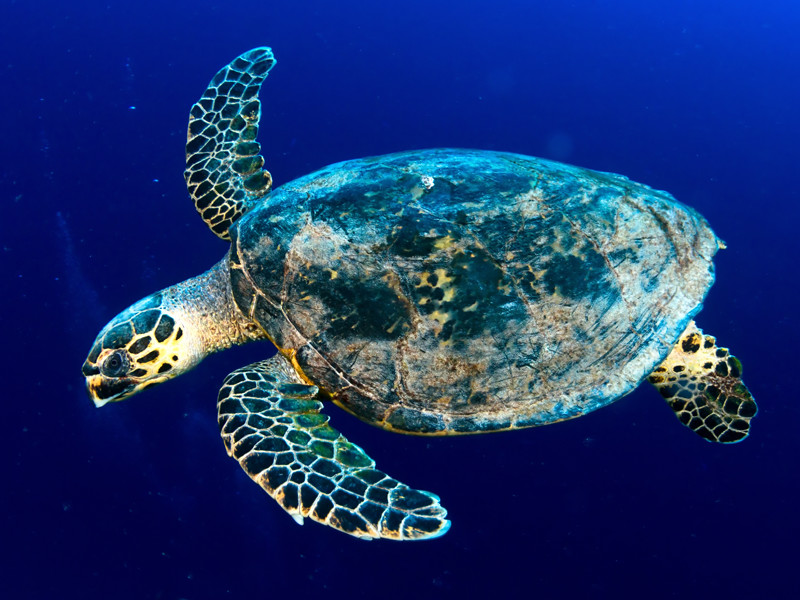 Natural predators of the hawksbill sea turtles are sharks, octopuses, crocodiles and large fish. Nests and offspring are at risk for being attacked by dogs, raccoons, rats, crabs or seagulls.

But none of the above affects the hawksbill turtle population more than humans.

The meat and eggs of this species are considered a gastronomic delicacy in some parts of the world. Likewise, its shell has been used to make home decorations or body accessories such as plates, vases, earrings, eyeglass frames, hair clips, among many others.

At present, killing a hawksbill sea turtle and trafficking its eggs is severely sanctioned.

Other threats to add to the list are the loss of habitat due to coastal development, destruction of coral reefs, bycatch, entanglement in nets left at sea, invasion of nesting areas and oil pollution, which ends up poisoning both food and the internal organs of sea Turtles.

Global warming has a greater impact on this species as it is highly dependent on coral reefs which are affected by the changes in temperatures and the acidification of the ocean. 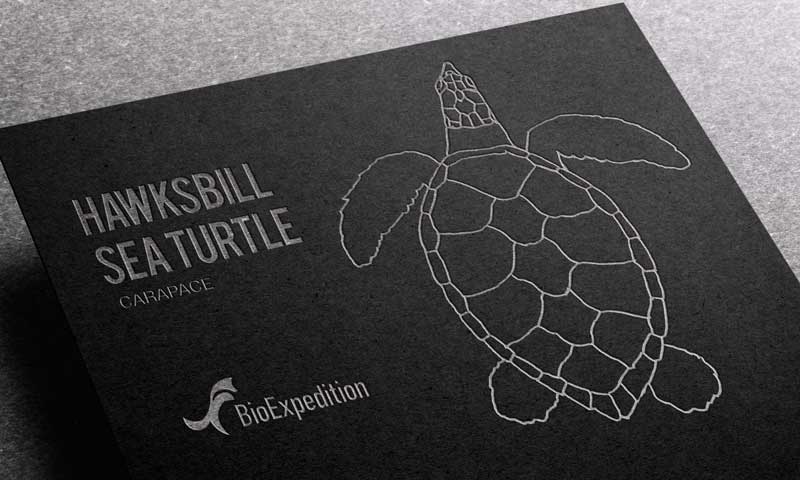 At present, killing hawksbill sea turtles is prohibited, and law severely punishes the traffic of its eggs and meat activities monitored by animal defending associations and law enforcement agencies. In some beaches with a high number of nesting females, the entrance of people has been restricted to avoid any disturbance that may alter its natural cycle. However, many irregularities continue to be committed illegally either direct capture or egg harvesting that end in the black markets.

The conservation status of the hawksbill sea turtle is “critically endangered” on the Red List of the International Union for the Conservation of Nature (IUCN), this means that a minimum surviving population remains that if not carefully protected, in a few years it will become part of the extinct species.