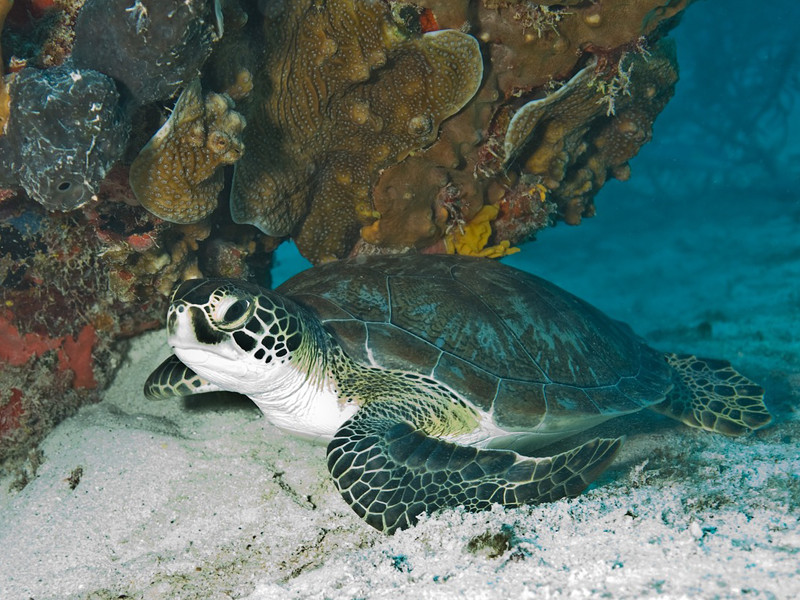 It is odd to start talking about the Green sea turtle, saying that it is not green. It was named “Green” because of the color of the fat located beneath its shell, not precisely because it looks green on the outside.

The green sea turtle is a large species, its shell is the biggest part and covers most of its body. It is composed of five central scutes flanked by four pairs of scutes that have a coloration either brown, gray, black or olive green.

Larger adults grow up to 1.5 meters in length and weigh 190 kg, but there have been exceptional cases in which they can exceed 300 kg. The males are slightly larger than the females and have a longer and thicker tail because their reproductive organ is at the base of it.

One way to differentiate the green turtle from other species of the same family is by observing the design of its mouth that is completely flat and short.

They stay underwater for up to five hours because their heart rate slows down to conserve oxygen.

Green turtles swim at a speed of about 1.5 to 2.3 km/h. And remain under water for up to five hours because their heart rate slows down to conserve oxygen. 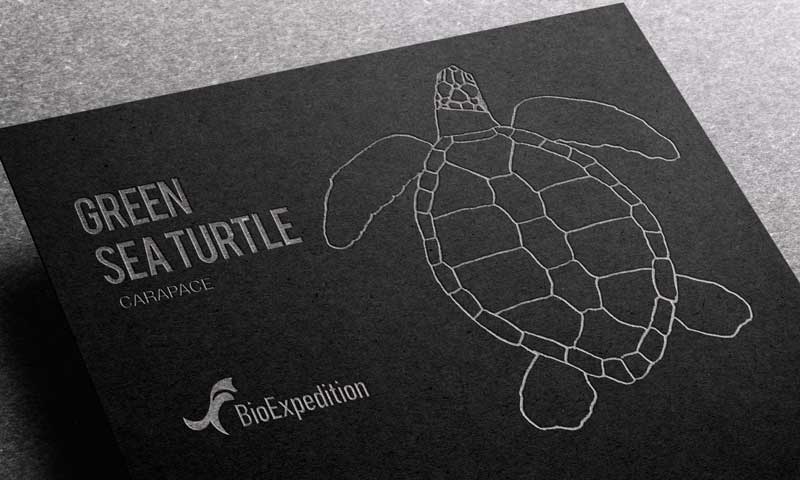 Its distribution includes tropical and subtropical waters around the world. They are migratory species whose nesting sites are in about 80 countries. Some of them manage to travel up to 2,250 kilometers, but this varies according to the geographical location where they live.

Northern Australia, Indonesia, Madagascar, Puerto Rico and Mexico are some of the waters that the green turtle visits, but two major subpopulations exist, one in the Atlantic and other in the Pacific.

In parts of the Cayman Islands and Mauritius are already extinct and possibly also in Israel.

The habitat of Chelonia mydas changes with their age according to their feeding habits as we will see below. Therefore, they have to live in places where they find the food they need. After leaving the egg and swimming to the sea, they go to the open ocean looking for zones with the food they consume at that time. Later, when they become mature, they look for shallow areas with abundant seagrass. 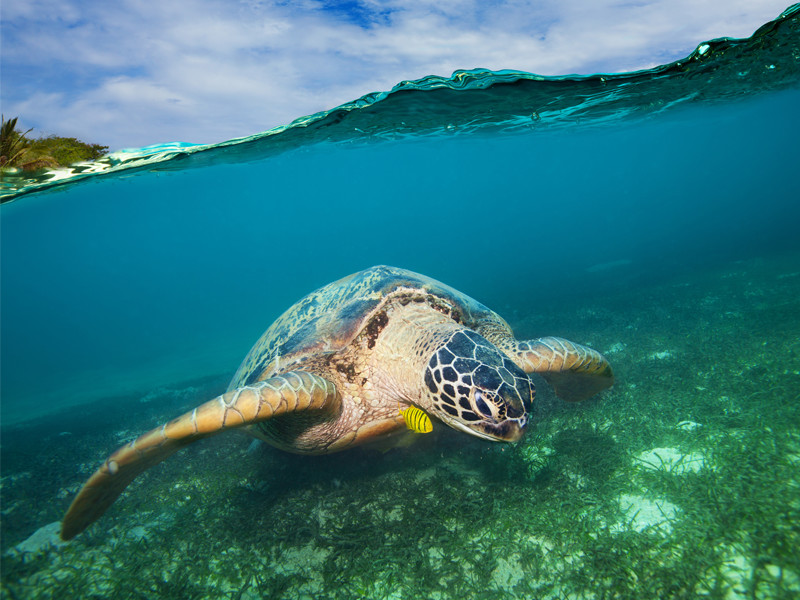 Adult green sea turtles are herbivorous that feed exclusively on marine plants and algae. However, the young turtles are omnivorous; they eat crustaceans, marine worms, jellyfish, crabs, sponges, snails, among other marine animals.

Mating occurs every two to four years and takes place in shallow waters near the coasts. The females are the only ones that leave the sea to enter the sandy beaches to choose a place without any disturbance to lay their eggs. With the help of their flippers, they dig a hole in the sand where they gradually deposit 100 to 200 eggs that will cover with sand at the end. Once the mother finishes the process, she returns to the sea and does not have contact with the offspring again. Females nest between three and seven times per year.

After a period of 40 to 75 days, the offspring struggle to leave the sand and instinctively head to the ocean. During this journey, hatchlings weighing only 25 grams, face the predation of several animals, so that very few survive.

As a curious fact, sea turtle hatchlings develop a sharp tooth that serves to break the egg; they have this structure for a short time since it falls off after a few days after born.

Males and females reach sexual maturity at the age of 20 and up to 50 years and have a life expectancy of about 75 years. 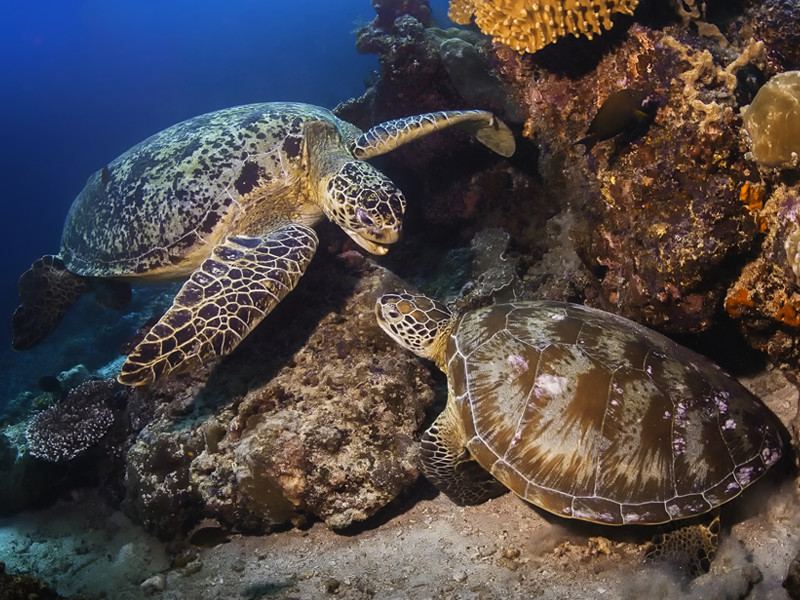 Pair of green turtles in waters of Sipadan islands, Malaysia.

Many threats have taken the green sea turtle to be in danger of extinction. Estimations presume that about 203,000 breeding females are living in the oceans around the world.

Green sea turtles face many risks since they are inside the egg. Predators like snakes, seagulls, rats, crabs, ants, among others, attack the nests or predate on the small turtles when they make their travel to the sea. Once in the water, sharks, dolphins and a variety of fish prey on the hatchlings.

Once they have reached adulthood, only the large species of sharks represent a danger to them.

Another significant threat to sea turtles, in general, is Fibropaplillomatosis a condition caused by a herpes virus that produces benign tumors in these reptiles. Although this disease affects all species, it has more incidence in Green sea turtles.

Even though the tumors are not lethal, they get dimensions so enormous that cause great inconveniences to the functionality of sea turtles which indirectly cause their death. For example, some occasions they grow close to the eyes obstructing vision, making almost impossible to get food. Other times they block mouth causing their death by starvation.

This illness is already a panzootic (an animal pandemic) as it affects all species of sea turtles, all over the world. There are some populations with up to 70% of individuals affected by this condition. The vector, or the organism that transmit the virus, has not been identified yet, but scientist guess that leeches or some kind of snails are the most likely.

Entanglement with fishing nets, ingestion of marine litter, egg harvesting, predation, and trawling fishing are responsible for the decline of much of the population.

The presence of humans in coastal areas alters the reproduction process. The urbanization and the construction of hotel zones limit the females from finding beaches to lay their eggs, and the presence of lights disorient the hatchlings, disturbing them on their way to the sea.

Osha Gray Davidson, Osha Davidson. Fire In The Turtle House: The Green Sea Turtle and the Fate of the Ocean. PublicAffairs, Nov 5, 2008.