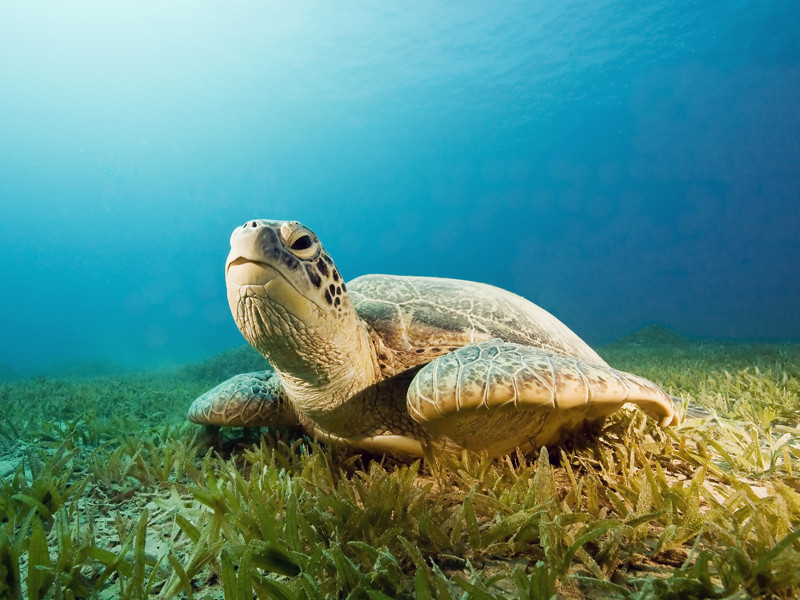 Here are some interesting facts about sea turtles. These aquatic reptiles are more surprising than we think.

2. Sea turtles are marine reptiles that belong to the superfamily Chelonioidea, which separates them from tortoises.

2. Ancestors of the same Testudines order than sea turtles have existed on earth for over 200 million years and have evolved to what we know today.

2. Six out of the seven species of sea turtles are in danger of extinction, and there is not enough data about the other to assess its conservation status, so it is unknown whether it maintains a stable population or is on the verge of extinction too.

3. The conservation state of the hawksbill turtle (Eretmochelys imbricata) and the Kemp’s Ridley sea turtle (Lepidochelys kempii) are so critical that scientists have predicted their total extinction in a few decades unless their situation is solved.

4. The lower or ventral part of the shell is called plastron, and the upper or dorsal part is called carapace.

5. Sea turtles are not aggressive unless they are in danger. However, becoming too close to them increases the risk of getting a painful bite.

6. These chelonians do not have external ears, but this does not mean that they can not hear. They can detect low-frequency sounds as well as vibrations in the water.

7. The largest species is the leatherback turtle (Dermochelys coriacea), whose largest specimen found was three meters long and weighed more than 900 kilos.

8. On the opposite, the smallest species is the Kemp’s Ridley sea turtle (Lepidochelys kempii) with a length of 90 cm and a weight of 45 kilos approximately.

9. Sea turtle hatchlings break the egg with the aid of a caruncle, which is a type of sharp tooth that they have for a short time and just for that purpose since it fell off a few days later.

10. The only maternal care of a breeding female sea turtle is digging the nest to lay its eggs and then cover them with the sand, but it never takes care of the offspring. In fact, they not even see the eggs ever.

11. A single nest can contain up to 200 eggs, depending on the species.

12. Sea turtles do not cry as an old popular belief stated. A gland located in the orbit of their eyes is responsible for expelling the excess salt stored in their body. Although they do this continuously, we can only see it when they are out of the water.

13. Sea turtles are one of the best navigators of the animal kingdom. When they are adults, they return to the same beaches where they were born to lay their eggs.

14. Sea turtle hatchlings have an instinctive behavior that makes them move from 24 to 36 hours continuously to escape from the predators lurking at them. This stage is called the frenzy period.

15. The hatchlings also show impressive navigation capabilities because they find their way to the ocean regardless they have never seen it before.

16. Only 10% of the eggs laid by a female sea turtle reach adulthood.

17. Six out of the seven species of sea turtles are in danger of extinction, and the remaining species does not have enough data to assess its conservation status, but it could be at risk as well.

18. Humans are the most dangerous predator that sea turtles have to face. They harvest their eggs from the nesting sites, kill adult sea turtles to eat their flesh and use their shell to make handcrafts. That is without mention the thousands of sea turtles killed incidentally by fishing nets.

19. Sea turtle gender is not easy to identify at plain sight until they are adults when the tail of males is thicker because their reproductive organs are in that part.

21. Sea turtles inhabit tropical and subtropical regions of the ocean where the waters are not cold because they are cold blooded animals.

22. The food that sea turtles consume varies if they are young or adults.

23. One of the favorite prey of sea turtles is jellyfish, although some have a deadly venom, sea turtles have a defense mechanism that protects them from this venom.

24. Sea turtles cannot introduce their head or limbs into their shell; only terrestrial turtles can do that.

25. Sea turtles suffer from a virus called fibropapillomatosis that develop large tumors, which although benign, they grow so large sometimes that make them blind or hinder their capacity to eat or even make them unable of swimming.

26. The leatherback sea turtle is the fourth largest reptile in the world.